This is a record of the steps taken to burn an audio file received via Facebook Messenger to a CD, in my case for my daughters dance competition. Downloading an audio file from messenger isn’t partciularly intuitive and once I managed to do that, I needed to use ffmpeg to convert the downloaded file from mp4 to mp3, before using Apple Music to burn the music to CD.

Facebook used to make it fairly straight forward to download audio files from Messanger, for some reason they now make it as difficult as possible. These steps were performed in Google Chrome on Mac OS, but shouldn’t vary too much from browser to browser, or OS to OS. They will need to be performed on a desktop rather than mobile device however.

Browse to the messages containing the audio file(s). 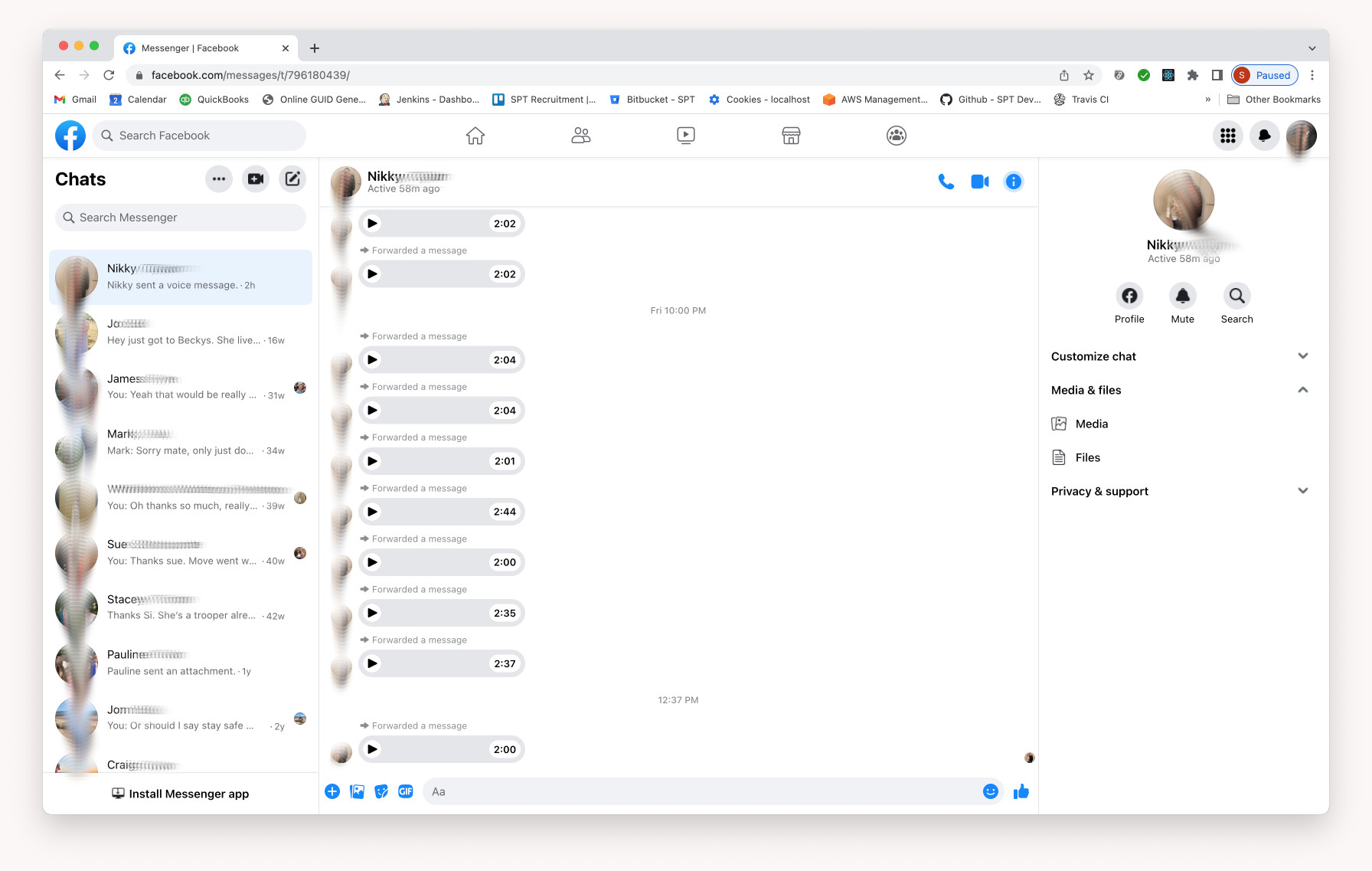 Hit F12 or however you prefer to open the browser dev tools and then select the network tab.

Click on the audio file to start it playing. If you have already played it, then refresh the Facebook Messenger page first and clear out the network history to make it easier to see which audio file was downloaded when you hit play. Then right click the audio file that appears in the network window and select “Open in new tab”. The audio file will be saved to your downloads folder. 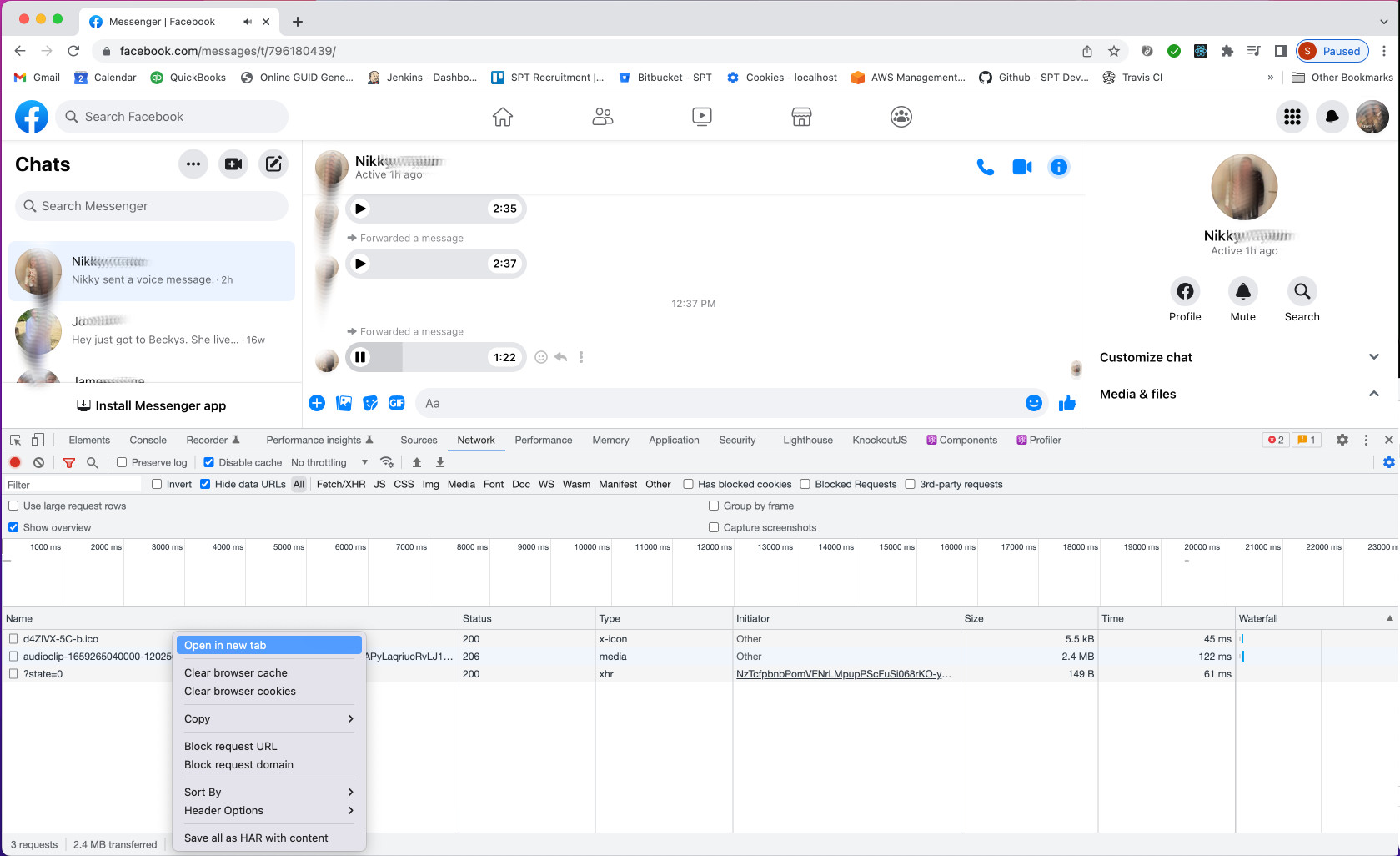 If you received an mp3 file, this step can be skipped. If you received an mp4 for example, then you will need to convert it to an mp3 file. If you try buring an mp4 file to CD, you will find that only the first 6 seconds gets written to the CD. I used ffmpeg that I had previously installed with brew, to convert the file with the following command:

Burning the audio file to CD 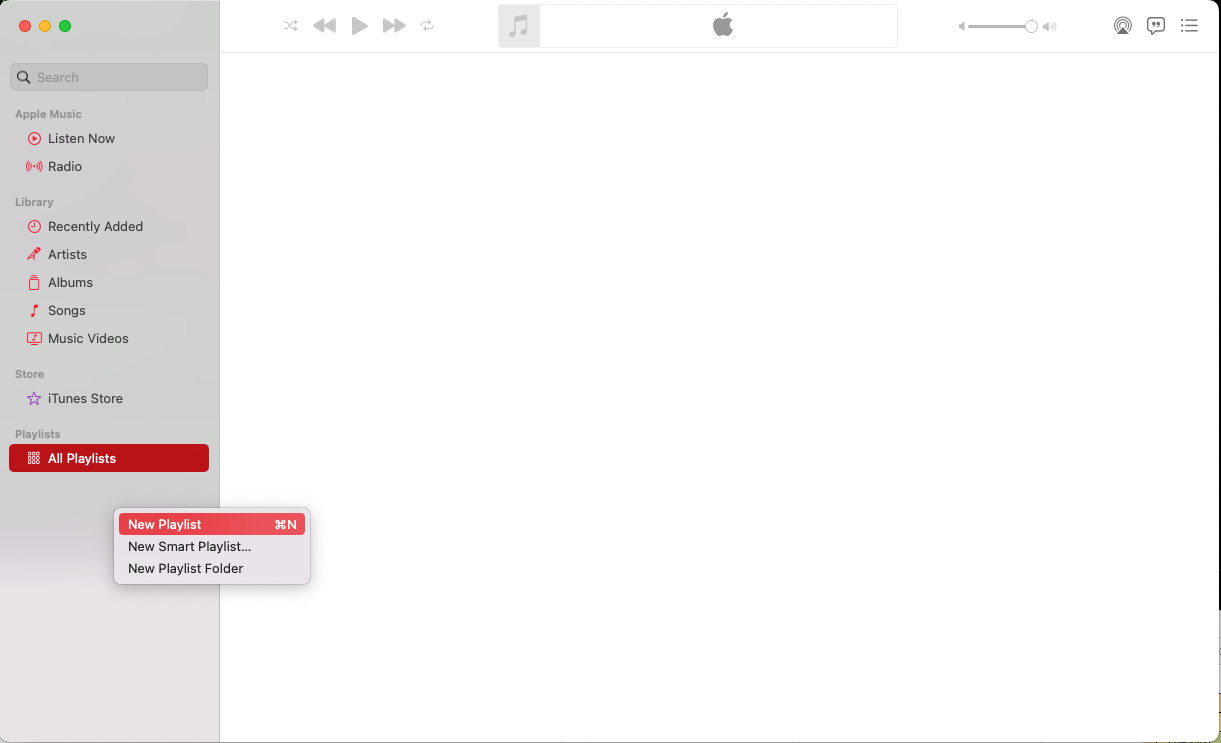 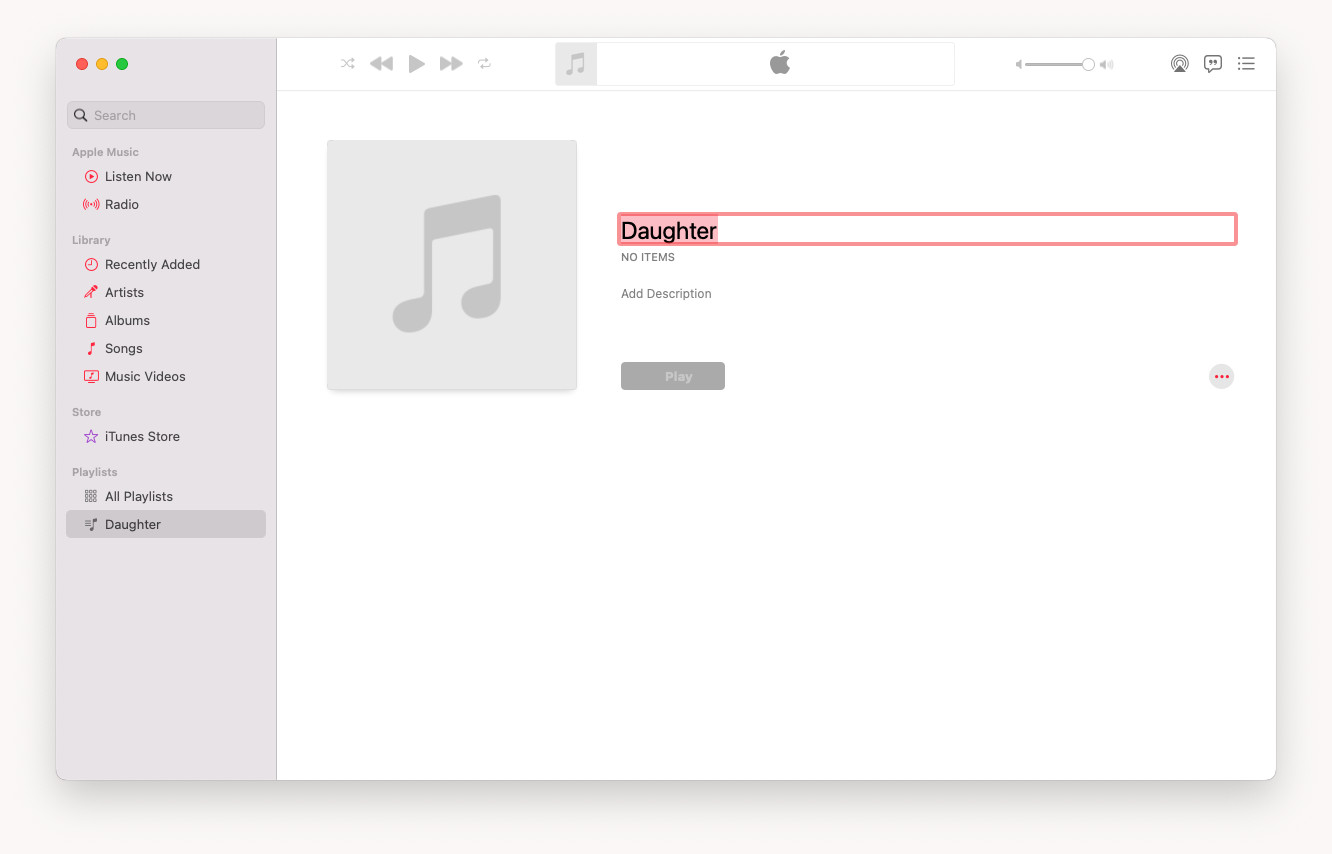 2. Add the audio file to the playlist

Find the previously downloaded/converted file in finder and drag it and drop it on to the newly created playlist in Apple Music. 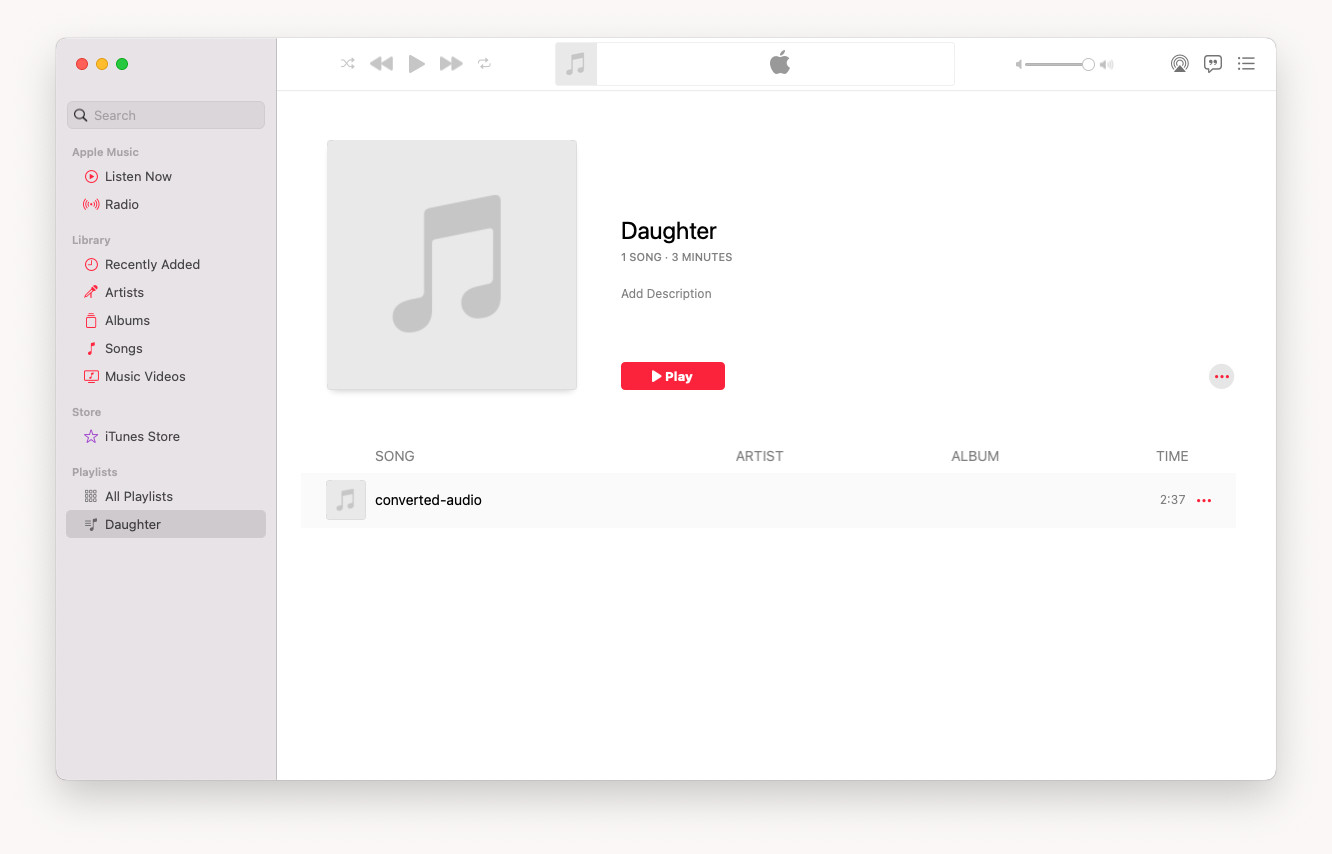 With a blank CD already inserted into the CD burner, right click the newly created playlist and select “Burn Playlist to Disc…”; in the dialog that is opened, leave the defaults selected and click “Burn” - the “Audio CD” format seems to be the most likely format to work, in a random CD player, but make sure you test the burnt CD! 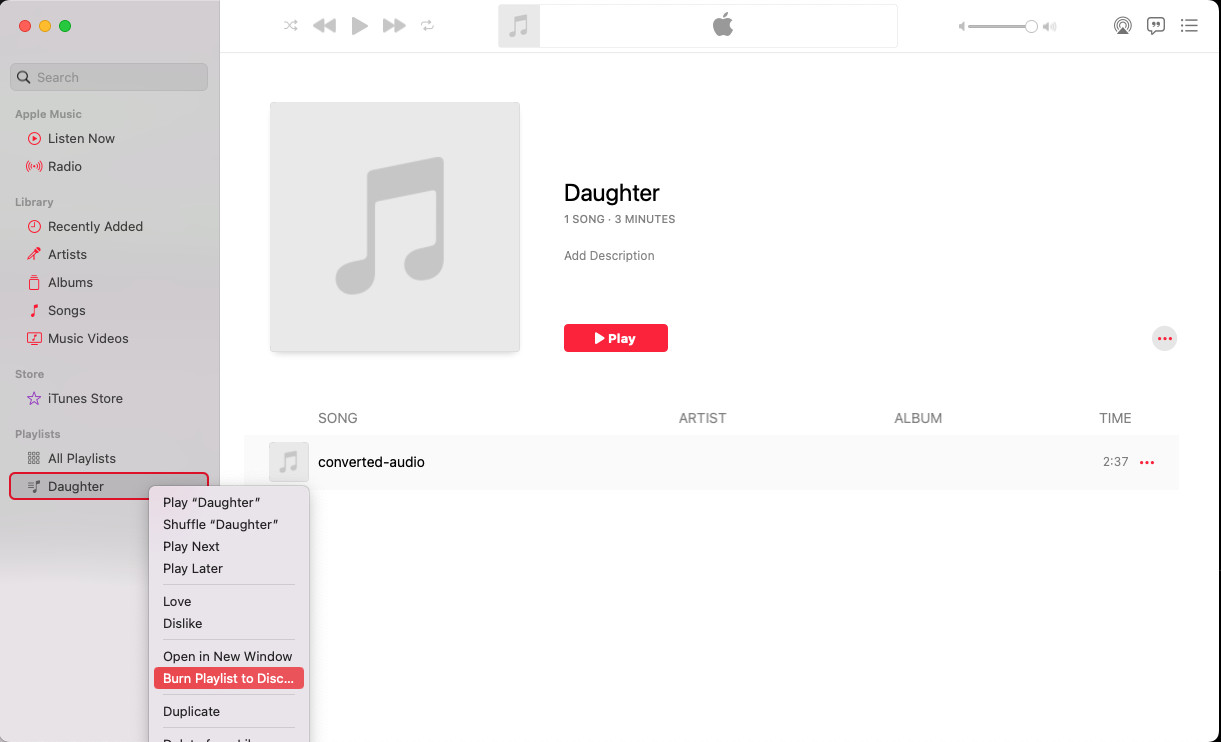 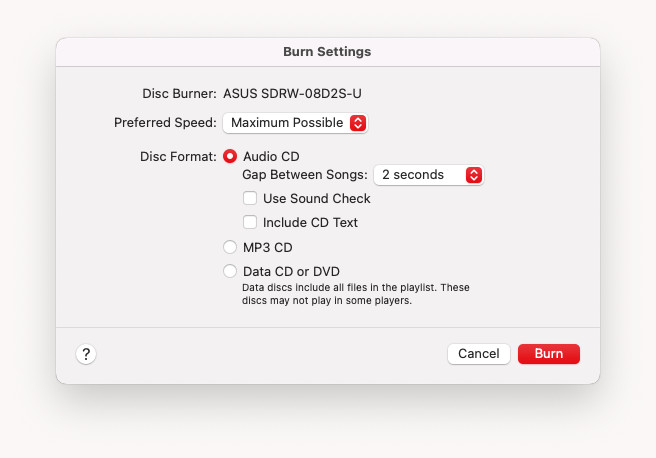 I tested it in an old CD player to give confidence that it will probably work at the dance festival.